It's actually been quite awhile since my last post. Too long in fact.

Since January, I have teamed up with an old colleague to start production on a web series based on a concept I've had for awhile.

I will of course keep the details secret for now. However, we are well into the 6th episode and we have plans to give you further details on crowd funding, release, concept art, and screenings in the coming months!

I know there hasn't been a lot of updats lately, but with patience comes big news. (in our case at least)

We recently sat down and worked out specifics for the whole business and where we are going next. It was a positive turn out. Everything worked, but not it's just a matter of putting it all into play.

Some things we worked out are:

There were a few other things, but the main focuses were those.

Now, how do we plan on making all of these things happen? Well, Stay tuned for the next 2 weeks and you will surely see. We're going to need all of your support.

Until then, watch a lot of movies and Find Your Direction.

First and foremost, I want to thank every single person for supporting us on Facebook and showing their support with our films. It is greatly appreciated.

We are on the verge of growing as a company. Yes this is a small organization for the time being. However, we discussed plans and goals for the future and we are pleased to say that we are happy with what we decided and are aiming towards. We want to reach as much of an audience as possible and show all of you the projects we have in store for you soon.

We are currently working on several scripts, reaching out to bands and artists for music videos, researching film festivals for Triangle, and looking to tie up business specifics to make this an official company. Big plans within the year.

By late spring/summer, we hope have the ball rolling and getting things up on here to show you all. Keep your eyes open.

Head over to www.facebook.com/lostboundfilms (or click the FB button at the bottom of the page) and spread the word to friends, family, anyone! We appreciate the support and we will do our best to give you some of the best projects you will see 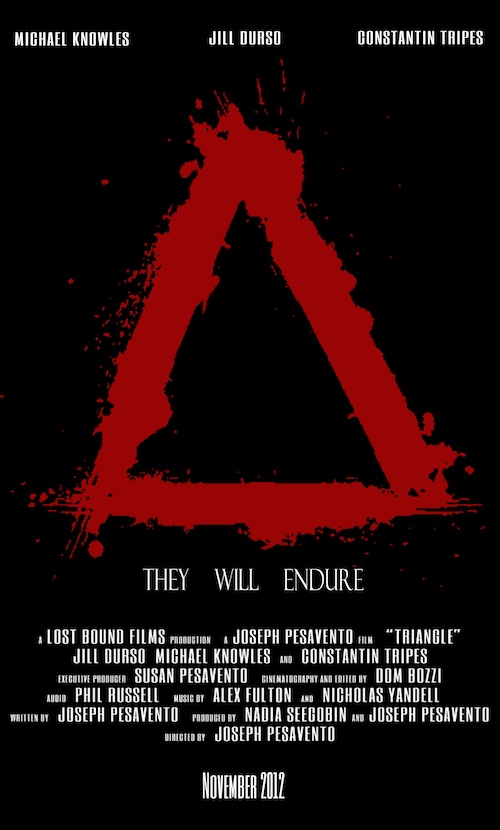 First I must say that it has been a VERY long time since I have posted a blog. I think I was honestly waiting to put this up as my next so here I am now. I am finally ready to present my latest short film, Triangle.

Triangle follows the character Paige, a victim of domestic violence. One day while running errands, she bumps into Kyle (literally) and this begins a romantic affair. Confused in the mess of her pain and new love interest, she makes an irrational decision to follow Kyle's plan to kill her boyfriend, Mark. Paige sees it as an escape to finally end the pain Mark is causing her. Is she really doing the right thing, or is she just seeing her violent lifestyle from a different perspective?

When I set out to do this film, I had the intent of covering a lot of ground. I have met people who have been in abusive relationships, had love affairs, and going to extremes with the best intentions. It occured to me that combining these elements could ultimately provide a life for a damaged character where they may do anything to save themselves. No one truly knows how to handle pain when it is thrown at them for no reason. I wanted to show a relationship between people that would not only make the audience sympathetic, but understand this happens everywhere in the world (maybe not to this film's extent, but in some sort of way).

Triangle touches me in a way that most people may not understand, but it is important that a film like this is made in the way those horrible situations take place... uncensored, unaltered, violent, and disturbing. It is a very touchy subject for not only humanity, but for people I love and who are close to me. By no means did or do intend to mock, ridicule, provoke, or make parodies of these horrible acts. However, it is a powerful subject, so the imagery of such should be just as powerful.

Whether you like it, love it, are disturbed, or think it's one of the worst films you have ever seen, I encourage you to watch this. Your feedback, positive or negative, mean the world to me. This film was made for everyone who has supported me. Now... support the journey of Paige, Kyle, and Mark. They will endure.

I just wrapped my latest short film Triangle a few weeks ago. As it works in the editing process and artwork gets designed, I think it's time to really focus on Lost Bound.

I have had the idea of starting this for quite some time now. I wanted to show people that I am truly motivated to create plenty of films using my own company and collaborate with other filmmakers.

However, Lost Bound Films as a business has to grow. Logos, business cards, advertisements, clients, and word-of-mouth all need to grow for my company to even begin getting somewhere.

Both this site and my Facebook site (https://www.facebook.com/Lostboundfilms) are going to grow in the near future. For the time being, I appreciate your consideration to check these sites out and check back for updates!

Oops! This site has expired.

If you are the site owner, please renew your premium subscription or contact support.